Place of Rest and Relaxation

Approximately 50km from Valence, La Rastelayre is best reached by car. It is situated along the D102, beside the Pont du Perrier, at an altitude of 480m. This charming old stone house is situated less than 5 minutes from St. Pierreville in the heart of the Ardéche ‘Parc Regional’, alongside the picturesque Glueyre river. It is surrounded mainly by chestnut woods and the Glueyre river, a class 1 category river, runs along the property. The river has many different types of fish including trout. Beavers and crayfish can also be found and there are many natural pools for swimming in. The beauty and tranquillity of the surrounding hills add to the peacefulness that can be enjoyed there.

La Rastelayre was built in 1890 at the same time as the bridge – Pont du Perrier. Its original name was ‘Baines des Resineaux’ and we think it was built as an early kind of health spa for people with Rheumatism.

In 1910 Mr. Henri Valette owned the house and turned it into a café, restaurant and ‘Chambres d’Hôtes’. It was a convenient stopping point to rest when travelling along the valley which was on horseback or by horse drawn cart/carriage in those days. During this time the Glueyre river valley was one of the key silk producing areas servicing the fashion industry in Lyon.

While Mr. Valette owned the house, he leased out the electric plant to a Mr. George Dondin who ran one of the silk mills up the valley. Electricity was produced by running water which was guided from the river along a canal to the house. The restaurant/café was well known amongst the locals and still remembered affectionately by them for its rabbit stew. Even today, people still stop by hoping to pop in for a coffee. In the days of the Valette family, the place was called ‘Pont du Perrier – Café Valette’. This can still be read on the painted sign on the front of the building.

The road running along the valley was part of the silk route to Lyon. This region was then big in silk manufacturing and there are a number of buildings along the river that used to be silk factories. The last of these ceased working in the late 1990’s. The silk industry gave way to other farming activities including growing chestnuts and ‘myrtilles’ (bilberries) as well as sheep and goat farming.

In 1986 the family Biscop bought the house and turned it into a home and workshop for fine furniture and musical instruments.

In 2000 Graham and Irene Houlder purchased the property with a dream of converting it into holiday gîtes and making it their home from home.

Three comfortable gîtes have been created at La Rastelayre and ongoing restoration work will hopefully produce a fourth one or maybe a couple B&B rooms, time will tell.

With the Glueyre river on its doorstep and a swimming pool in the garden, it seems La Rastelayre is going back to what it was originally built for – a place to relax and recharge the batteries. 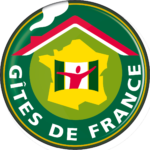 Gîtes in a charming ambiance